William contacted some participants from his 2018-2019 fieldwork in Lebanon and provides an update on their situation.

At the end of March, Lebanon had 446 positive COVID-19 cases and 11 deaths, but the numbers will certainly rise in the coming weeks. In a country struggling since December 2019 with a major political and economic crisis, the Lebanese people and refugees need to find a way to adapt to the new situation, which is threatening the precarious daily lives of many. In Lebanon, migrants account for 30% of the total population – the biggest proportion in the world. Syrian refugees are estimated to number between 1 and 1.5 million, with 25% of them living in one of the many camps across the country. 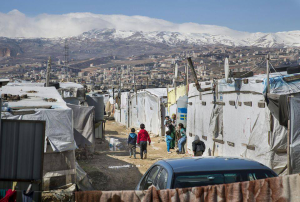 Refugees were living in overpopulated camps with poor sanitary conditions. Those in refugee camps in Lebanon, as in the rest of the world, are highly vulnerable to the virus, since it is particularly difficult to implement recommended measures of self-isolating or social distancing to limit its spread.

« We live in constant fear that one of us will catch the virus, since it only takes one person to infect the entire camp, in which over 50 Syrian refugees live. » – Amina

Moreover, the shutdown of companies, banks, industrial complexes, and other sectors of economic activities affects refugees as well, with some of them losing their daily work as agricultural or industrial workers.

« The women in this camp who worked daily on the farmland earned 3 US dollars a day and
this is what kept their children fed. » – Abdul Karim

Currently, there are no confirmed COVID-19 cases in Syrian refugee camps in Lebanon; however, the increasing number of infections in the country, as well as the lack of services that could help reduce the risk of the virus spreading in camps, are adding to the already high precarity experienced by Syrians living in camps. In coordination with NGOs and UN agencies in Lebanon, on March 3rd the Ministry of Social Affairs established a preventive plan to avoid the spread of the virus. This plan consists of organising a joint awareness campaign, along with the UNHCR, to provide disinfection supplies).