Confined outside or let down inside:
Precarious migrants in the Paris region in the pandemic era

Report written by Annaelle Piva, Paris
Ph.D candidate and member of the Chair

Annaelle focuses on irregular migrants in urban spaces, comparing the situation in the cities of Rome and Paris.

In France, as in many countries, the measures taken to slow down the transmission of the COVID-19 virus severely affect migrants, including asylum seekers. Indeed, the process for taking care of migrants has been delayed by authorities for the duration of the pandemic. In practice, this means that the hearings taking place at the French Office for Refugees and Stateless People (OPFRA) and the National Court for the Right to Asylum (CNDA) are being postponed. Thus, these shutdowns are lengthening what were already lengthy procedures. It currently takes a minimum of 8 months to receive an initial response.

At the other end of the process, tensions are increasing in administrative detention centres (CRA), which are jails where people denied asylum are detained while waiting a potential deportation. On top of poor conditions in detention, visits have been cancelled and obtaining legal support has become impossible. Moreover, flights to countries of return have been suspended, which has increased detainees’ waiting time and led to overcrowding in spaces where the measures taken to mitigate the spread of the virus are insufficient.

In Paris, people with a roof over their heads are confined, while homeless people are forced to keep moving, despite reduced resources and increased police controls.

“Everyone is afraid. Everything is closed in Paris except for the migrants’ reception centre of Porte de la Chapelle, where people can still come to take a shower and do their laundry. It is limited to 80 people a day versus 100 to 400 before. The police came to check “if everything was alright”. We did not let them come in, for fear that they would conduct police controls and put people who are already exhausted under more stress with their presence.”

Due to the pandemic, most NGOs have had to suspend their activities. Some collectives have maintained their distributions despite the confinement, and they have observed an alarming rise in the number of people who are unable to feed themselves. Also, the efforts of police to ‘confine them outside’ have increased, including in the insalubrious camp of Porte d’Aubervilliers, where more than 500 inhabitants have no access to water or bathroom facilities. With help from Doctors Without Borders, minimal sanitary infrastructures have been built as a temporary response before the evacuation of the camp. 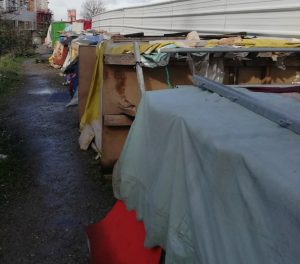 In January 2020, the 60th evacuation of the camp, since 2015, took place. To address the pandemic conditions, the 61st evacuation would need a larger reception plan and more health monitoring than ever. However, hospital capacities are limited, emergency shelters are saturated, and many migrants are hidden in squats or on city corners, without access to healthcare.