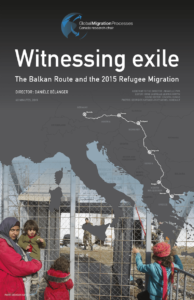 In 2015-16, Europe was the destination of nearly one million refugees, the majority of whom traveled the historic route of the Balkans in order to reach Germany. Witnessing Exile captures with simplicity and authenticity the trace left by this exodus among those who have witnessed it along the way. Danièle Bélanger went to meet them on one of these roads. The film presents intimate testimonies and powerful analyses of people whose lives were transformed by this major event in the world’s migratory history.

Watch the film on Vimeo